“One big issue, I think, is how do we create the frameworks, procedures and incentives which will oblige our executive politicians to pay more attention to fantastically important longer term issues (e,g. climate change, technological change, demographic change) and less to what will appear on this evening’s TV news.” – Christopher Pollitt. 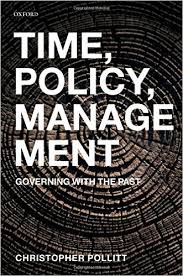 With this in mind, Christopher Pollitt wrote the book “Time, Policy, Management – Governing with the past” in 2008, in order to demonstrate the importance of taking into account the temporal dimension in contemporary public policy making and management. Having begun his academic life as an Oxford undergraduate in the School of Modern History, the Emeritus Professor of public management “realized that the journals in [his] field were carrying fewer and fewer historical articles”. Naturally, there are works written by historians, political scientists, sociologists and psychologists which deal directly and indirectly with temporal issues such as path dependency and cognitive biases in decision making. However, unlike most of these authors, Christopher Pollitt stresses the importance of time in relation to public policy and management.

“Time, Policy, Management – Governing with the past” is designed to be an academic book but the author hopes that practitioners (public officials, politicians) and journalists are interested in reading it, too. Furthermore, the biggest part of the book is written in a way to be accessible to masters students, the purpose being to represent “a first step in the restoration of past and nature of temporal processes as essential components of public policy and management” (p. xvi). Because of the structure of the book, where each chapter has its own purpose, we will follow the author’s plan and summarize the book chapter by chapter.

The first chapter of the book, “The End of Time”, aims at “[getting] some big ideas on the table” (p. 5). It serves as a sort of introduction to the book. Here, the author explains to what extent the temporal dimension is neglected “– or at the very least under-conceptualized -” (p.30) in most contemporary works on management and public policy. He then brings up why past and history do matter: for example, there are “processes that simply take a long time” (p.15), such as generational change, fundamental organizational restructuring, training people. There are also “contexts in which temporal sequence is crucial to outcome” (p.20), which illustrates the difficulty of going back after making a decision, and “contexts in which cycling or alternation are typical” (p.21) where people keep going back and forth between alternatives because of an enhanced awareness of what is missing. Christopher Pollitt criticizes how politicians focus on urgent problems and are not interested in longer term issues.

The book is then divided into two parts: In the first part, which includes chapters two, three and four, Pollitt lays out his theory and applies it to a particular set of cases. In the second one, he undertakes a broader assessment of public policies: a wider range of empirical material in many sectors and countries is therefore taken into account.

A particular set of cases

The next chapter, “Timeships – Navigating the Past”, treats the different academic fields in which the temporal dimension is inevitable, and introduces six different approaches to time which Pollitt calls “timeships”. The historical approach (1) shows that one cannot decontextualize history. The path dependency framework (2) usually aims “to explain why some important things stay the same- or almost the same- over considerable periods of time” (p.42). Theories of cycles and alternations (3), already mentioned above, state that the “grass on the other side always looks greener” (p.53). Another approach is to take sociological studies (4) into account which explain for example the “Time is money“ philosophy and analyse different perspectives of time according to what one does with it.  The organizational ecology/ organizational evolution approach (5) states that organisations with strong hierarchies can adapt better but “disappointingly, most evolutionary theorists seem to have given only limited attention to the concept of time itself” (p.65). Lastly, the analysis of cognitive processes and biases of decision makers (6) shows that there are biases, cognitive constraints that often have strong temporal dimensions. People are too worried of repeating last month’s mistake without thinking of the one they made ten years ago.

The following two chapters “History in Action – A Tale of Two Hospitals” and “Beyond History? The Added Value of Alternative Approaches” tell the story of two public service institutions between 1965 and 2005: the Royal Sussex County Hospital (RSCH) in Brighton, England and the UZ Leuven hospital in Belgium. One, a run down nineteenth century hospital, which the NHS is unable to renovate despite having elaborated several projects to replace it, the other, a new hospital built in the 1970s in periods of crisis between the Flemish and French speaking parts of Belgium. The author first portrays both histories and then examines the two studies in a more formal way, using the approaches introduced in the former chapters to determine why the UZ Leuven hospital plan came through and the RSCH’s one in Brighton did not. Regarding the two hospitals, to Christopher Pollitt “it soon became abundantly clear that national politics featured heavily in both stories” (p.93). Concerning the Path Dependency Framework (2), he concludes that Leuven managed to overcome a political and financial crisis and Brighton did not because its proposal had unfortunate timing. Brighton’s bid for a new hospital was made in a period of economic and fiscal crises which forced the government to freeze public sector investment. Leuven on the other hand, developed its own strategy in response to the crises, by constructing a network with other healthcare institutions. The author also finds some cyclical patterns (3) to the two cases such as the “cyclical nature to hospital finances” (p.105) and alternations in the adoption of innovations such as machines, technique and software. Concerning sociological studies (4), some interviewees in Leuven considered themselves lucky to have had only two leaders in 30 years, whereas the average tenure of top managers in Brighton was comparably short as of 2004. Christopher Pollitt also analyses how both organizations responded to environmental changes (5). In Brighton 13 small hospitals closed during the period of the study due to outdated medical technology and equipment getting dearer. The interviews Pollitt conducted also detected hints of psychological perspectives (6) which tend to explain the cognitive tactics of decision makers. An example is the timing of the closures of the smaller hospitals, which had to be presented as an improvement by the government. Furthermore, in Belgium “it was first conceived that hospitals […] required professional management” (p.116) in the 1980s. Pollitt concludes that a better taking into account of these aspects makes the difference between success and failure in public policy making. Both studies indeed show how a longitudinal analysis can contribute to a better understanding of the situation and help to find a more efficient solution to strategic, administrative and managerial problems in the public sector.

A broader appraisal of the field

Chapter five broadens the field by analysing and reinterpreting seven research works which all treat the question of time to different extents: long time processes, contexts in which temporal sequence is crucial to outcome, contexts in which cycling or alteration are typical and time tactics. With this chapter, the author extends the range of sectors by including studies in more countries than England and Belgium: “the states that were compared were France, Germany, the Netherlands, Spain, Sweden and the UK” (p. 129)

In chapter six, the author proposes a conceptual “Toolkit for Time” which summarizes all the concepts and some of the practical approaches that are crucial to the temporal dimension. The author argues that the latter has “significant promise for future research in public policy and management” (p. 143). Christopher Pollitt explains the terms of duration (how long do things take?), the path/arrow idea (once a path taken, you cannot go back), punctuations (moments when something changes) windows of opportunity (time windows when change is possible), causal mechanisms (what lies behind each path/arrow?) and multiple times (clock time, personal time, electric instantaneity).

The seventh chapter, “Wider Implications for Governments”, explicitly addresses a practitioner audience, and answers two decisive questions: First, “Why should policymakers concern themselves with the past?” (p.161) part of the reason is that learning from the past is useful to avoid future failures and drawing on past traditions helps legitimate future reforms. Second, “What do policymakers need to know about time?” (p. 168); again, the answers include the need to preserve organisational memory and the importance of investing in sustainable programmes.

“After All”, Christopher Pollitt concludes the book with a last chapter about reflections on the importance of the temporal dimension in policy making and management and how one can use this knowledge to adjust to the technological revolution we are living in.

Governing with the past

Time, Policy and Management is an innovative book, which – apart from some chapters which he designed especially for theoreticians – is very accessible not only for master students or practitioners, but even for second year political science students. The author explains all of his ideas in detail and uses many metaphors and examples. In certain parts of the book, reading “Time Policy, Management – Governing with the past”, feels more like reading a journal than an analysis of public policy. Pollitt is honest and human in his writing, illustrating the book with experiences from his own life. For example when he tells the story of his father’s death in the preface, which caused the author to “[find himself] thinking further about continuities and changes over time” (p. xiv).  He indeed dedicates an entire chapter to practitioners and uses a very direct way of speaking to sum up his theory. Moreover, Christopher Pollitt guides the reader through his book by introducing every chapter, saying what he will write and how this contributes to the subject.

The structure of the book is nevertheless sometimes hard to follow. For example, chapter three which tells the story of the two hospitals is very narrative, while the fourth is very theoretical, referring to the former one. This leads the author to sometimes repeat himself. It might therefore have been better to combine both chapters. Furthermore, Pollitt underlines repeatedly that he is one of the first and only people to introduce time perspective to public management and public policy making: “With a few honourable exceptions, the past has been squeezed out of contemporary academic treatments of public management and public policy making” (p.29). He indeed bases his theories on a very thorough research in the fields of sociology, political science and even psychology. Throughout the whole book, Christopher Pollitt quotes many experts of different fields but his research cannot by definition be exhaustive. In fact, the book makes no mention of Theda Skocpol, a sociologist and political scientist, also well known for her historical-institutional and comparative approaches, particularly in France. Confronted with this criticism, Christopher Pollitt explained that: “professor Skocpol is primarily a sociologist. She usually deals with issues of public policy and wider questions of culture and institutionalism. I focus on public management – on what governments do to formulate, but especially also to implement their various policies. In some senses my focus could be said to be somewhat narrower than hers. So Professor Skocpol’s interests and mine do overlap somewhat, but they are far from identical.” This shows that Pollitt sees himself in a different register than just a sociological one, focussing more on public action and on management than on public policy making.

His thought-provoking book has clearly been designed to “[connect] with important debates about policy agenda setting, governmental decision making and organizational adaptation, learning and change” (p. xiii), it would therefore be interesting to ask oneself how Pollitt’s toolkit of time can be applied to current political problems, like the European refugee crisis. 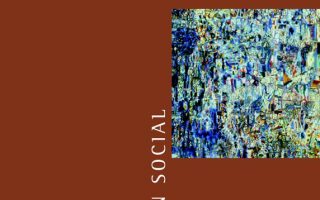